The Bossotel Chiang Mai Hotel is closest hotel to Chiang Mai train station and the most popular hotel in Chiang Mai with readers of Thailand Trains websites. This a fairly large hotel with two room types: Superior and Deluxe. It also has a swimming pool, restaurant and free WiFi in the rooms. There is also a basic buffet breakfast available, but only if you opt to book a room and breakfast package or pay for the breakfast as an additional charge. To get to this hotel from the train station you exit via the front entrance, walk left across the car park and then right down the station approach road towards the main road. The hotel in on the left about 40 metres down the station approach road before you reach the main road. The reception of the Bossotel is also the collection point for train tickets for travel from Chiang Mai booked through Thailand Trains or this website.

Medium sized budget hotel with a swimming pool. All rooms come with free WiFi, fridge and cable TV. The hotel also has a small restaurant. The deluxe rooms are only slightly more expensive, although no bigger than the standard rooms the extra amount is well worth paying if you would like a double bed with a comfortable mattress. This hotel is good value for money although in need of renovation.

This is a great small hotel which could be described as ’boutique’. The big selling point of the hotel is the tropical garden with two swimming pools. The rooms themselves are well furnished with notably comfortable beds, free WiFi, cable TV, mini bar, tea and coffee maker, and in room safe. It is the best, and most expensive, of the 8 closest hotels to the train station. Most room packages include a buffet breakfast at the hotel’s restaurant. There are some really nice common areas where you sit and enjoy the hotel’s large well maintained garden. If you stay then take advantage of the free transfers to (but not back from) the Thae Pae Gate at the edge of Chiang Mai’s historic old town. 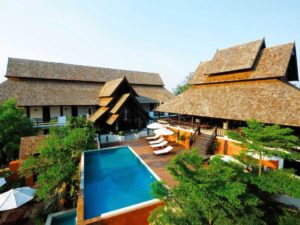 Standard rooms at this mid-range hotel are great value for money. The rooms are quite large for this class of hotel (24 sqm) and feature an extensive range of in room amenities such as cable TV, free WiFi, in room safes, and refrigerators. The rooms also have balconies. The hotel has a swimming pool, sun deck and restaurant. Most of the room packages include buffet breakfast. This hotel has reputation for friendly and helpful service. Guests can take advantage of the free shuttle service to the Night Bazaar and save 80 to 100 THB on a tuk-tuk journey.

This is a new hotel with very large rooms. It is cheap because they are still (as of 2016) putting the finishing touches to the hotel. The 30 sqm rooms come with twin beds or a double bed, free WiFi, air-conditioning, en suite bathroom, balcony and cable TV. Once the hotel is fully operational it will also feature a fitness gym and swimming pool. From the outside this hotel looks like an apartment block and from the upper floors there are some great views. For a value for money stop over by the train station then this is just the ‘ticket’, however, if you are looking for a holiday hotel as base from which to explore the delights of Chiang Mai then carrying on searching.

Not exactly a hotel in the sense of having a permanently staffed reception desk and the usual service standards you might expect at a hotel. As the title suggests this is a hostel where the majority of guests stay longer term at lower monthly rates. For a night this place is not that bad if a room with good air-conditioning, comfortable bed, extensive range of cable TV channels and good free WiFi is what you are after. As you would expect from a hostel, the range of service available are aimed at longer term guests, such as the inexpensive coin operated laundry machines. To be fair the W Hostel is very new (2016) and it may improve over time. Note also that this hotel has no elevator, and if you have mobility difficulties, or heavy bags, then you may struggle to reach your room, particularly if it is on the top (fourth) floor.

If you are going to stay at this very cheap hotel, pay the small amount extra for the deluxe room. Standard rooms have twin bed, no view, no fridge and only Thai language channels on the TV. For an extra few baht you can upgrade to a deluxe room with fridge, a view out of the windows, cable TV and a double bed. All rooms come with free WiFi. You get what you pay for and if you are on a tight budget and need to stay within walking distance of the train station then this may be the best option for you. This hotel has no restaurant, or swimming pool, or other facilities, but they will do your laundry for a small fee.

Sunny Side Up Apartments

Not a hotel, but a small collection of studio and 1 bedroom apartments for rent by the day. All apartments come with kitchen area for food preparation, free WiFi, cable TV and king size beds. The rooms are large: studios are 45 sqm and 1 bedroom apartments 50 sqm, which is significantly larger than the average size of 4 star hotel room in Bangkok, a mere 30 sqm. This residence has no restaurant, or other facilities, but it does have a nice peaceful setting and a garden with facilities for your own BBQ. This is a home away from home and it will best suit travellers who need some proper rest and relaxation before continuing with their journey.

Next find out how to Buy Train Tickets to Chiang Mai

No votes so far! Be the first to rate this post.

Click on the image for the complete guide to the 5 direct trains a day from Bangkok to Chiang Mai.

Click on the image for information about the closest hotels to Bangkok and Chiang Mai Railway Stations.